50Km from the estate

Picturesque and austere town at the foot of Monteluco, the “holy mountain” inhabited in ancient times by hermits.

It is among the most representative of Umbria for its monuments dating back to pre-Roman (city walls and arches), Roman (arch of Drusus, amphitheatre, theatre, temple, house), medieval (Cathedral, S. Salvatore, S. Pietro, S. Eufemia, S. Gregorio, Ponte delle Torri), for the essays distinguished by Renaissance art, for the museum and art gallery.

It was damaged during the last war. Famous for the “Festival of Two Worlds.” 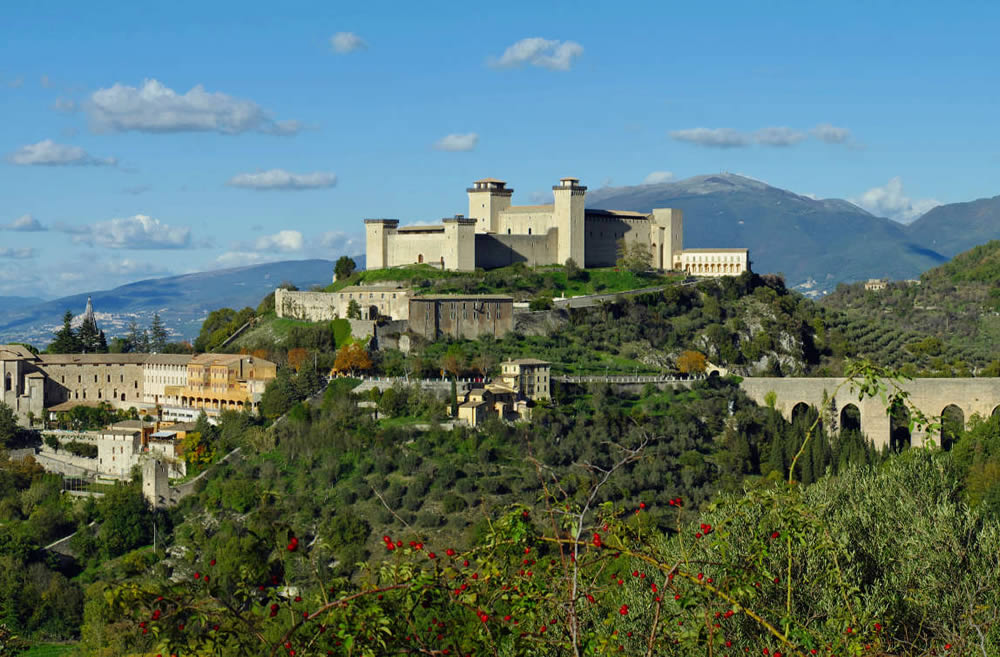 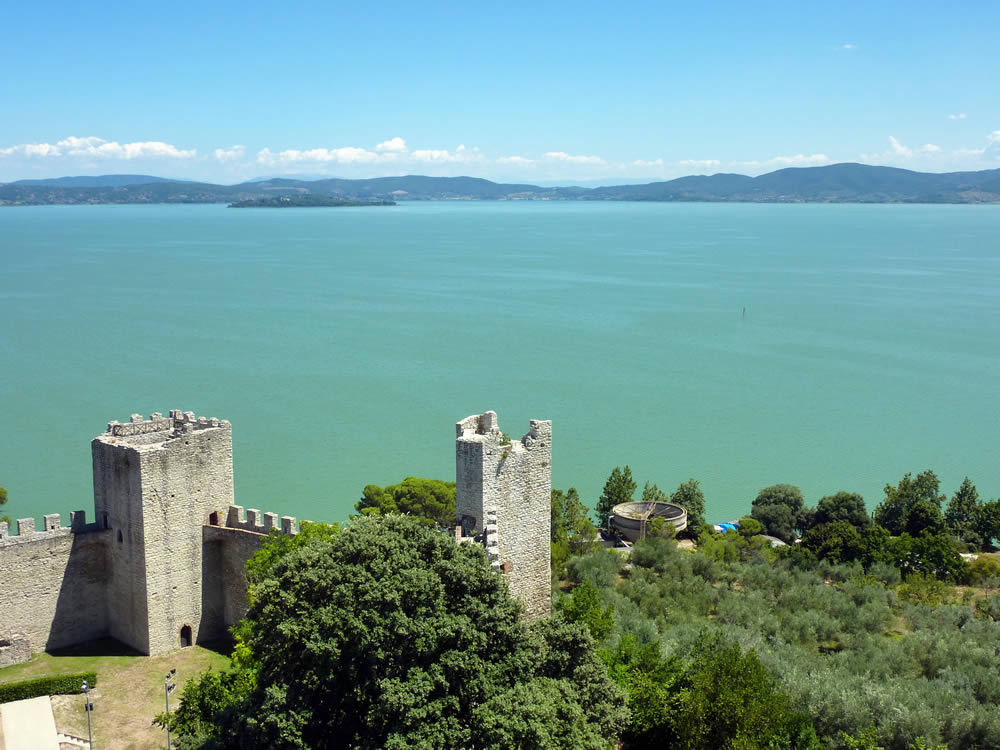 85Km from the estate

Almost circular, the lake Trasimeno has a surface area of 128 km2. Unlike most other lakes in Umbria, it is not a volcanic lake.

It is the fourth biggest lake in Italy. Being just 6/7 m deep and rich in mineral salts, it is also rich in fish, zooplankton, water invertebrates, amphibians, water birds.

Its islands are three: Maggiore, the only inhabited one, Polvese and Minore, covered with thick woods. From an historic point of view, the lake is famous for the Battle of Lake Trasimeno occurred on the northern shore of the lake in April 217 B.C. when Hannibal defeated the Roman consul Caio Flaminio Nepote.

42Km from the estate

Perched on top of a huge tuff rock, like an island emerging from the valley of the Paglia. It’s envied glory is the famous Duomo, begun in 1290 and continued by the Sienese Lorenzo Maitani (1308-30) to whom we owe mainly the facade (completed in the 16th century) and the end.

In the city of particular interest there is also the Palazzo del Capitano del Popolo and several churches (S. Andrea, S. Giovenale, S. Francesco, S. Lorenzo in Arari and nearby Abbey of SS. Severo and Martirio), as well as the “Pozzo di S. Patrizio” (Well of St. Patrick), known for its unique structure, designed by the Young Antonio da Sangallo (1527-37).

Among the most characteristic manifestations in town are the “Feast of Corpus Christi, Pentecost and the “Feast of the Palombella”. 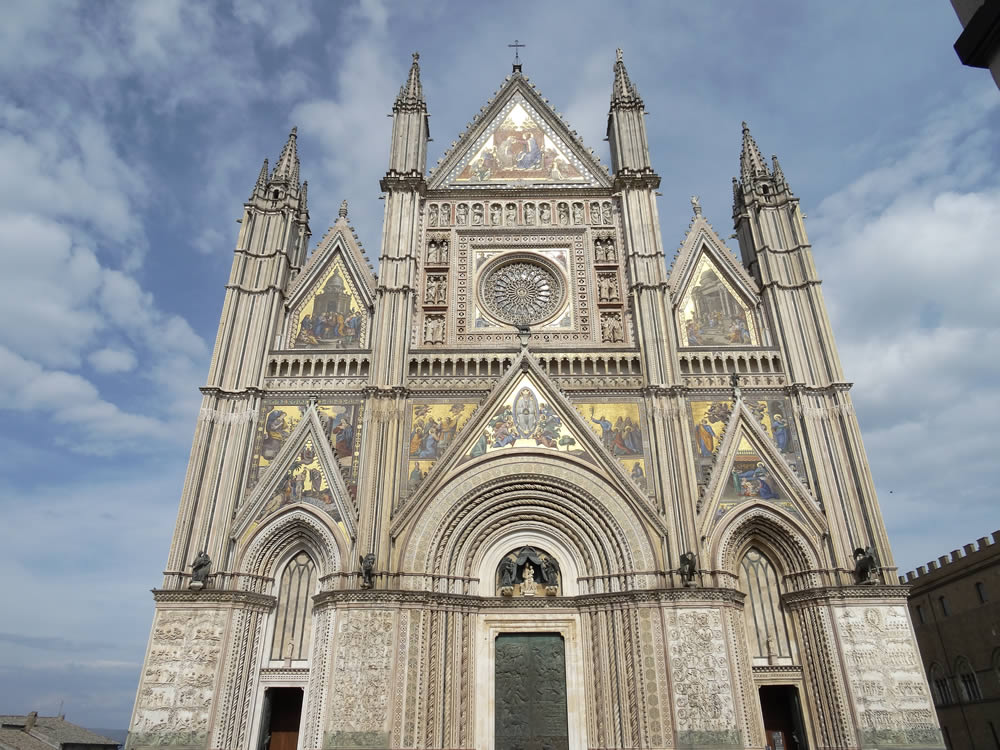 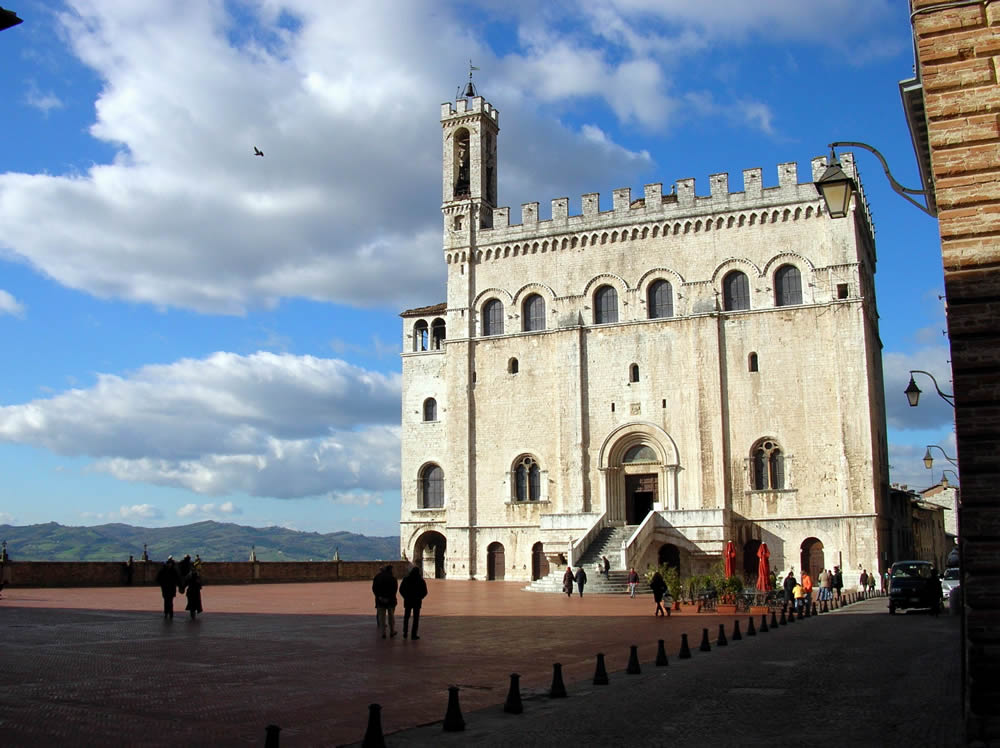 105Km from the estate

One of the most characteristic towns in Umbria, full of charm for its medieval appearance still intact. From the 11th to the14th century it was a powerful city, as attested by the Palazzo dei Consoli, the Palazzo del Bargello and several churches, from the Cathedral to S. Francesco, S. Domenico and S. Agostino.

When it passed to the Montefeltro, they erected the magnificent Ducal Palace. In the 15th century it was the birthplace of the architect Matteo Gattaponi and other good painters and, from the 16th century it became a flourishing school of ceramics that is still active.

Among the city festivities there are the “Corsa dei Ceri” (candle race) and “Tiro della Balestra” (crossbow shooting).

83Km from the estate

It clings onto the slopes of Mount Subasio, with extensive views of the Umbrian plain.

It is famous throughout the world for the memoirs of S. Francis (1182-1226) who still live in certain mystical “atmosphere” of the town, in unadorned churches as well as superb medieval temples with memorable paintings by the highest masters of the schools of Pisa, Florence, Rome and Siena from the end of the 13th century and beginning of the 14th: from Giunta to and Giotto – superbly represented here – to P. Lorenzetti, Simone Martini. Formerly defended by mighty walls, part of which have survived, with Roman monuments, several architectures from the Middle Ages, the city is now home to various events, first of which is the Festa di Calendimaggio (May Day) (end of April) and Perdono (Forgiveness) (early August). 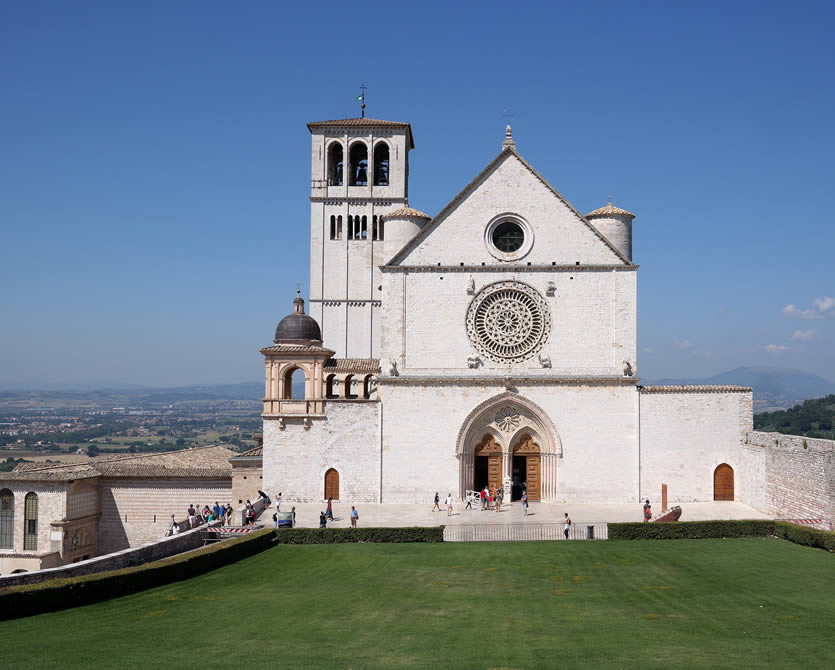 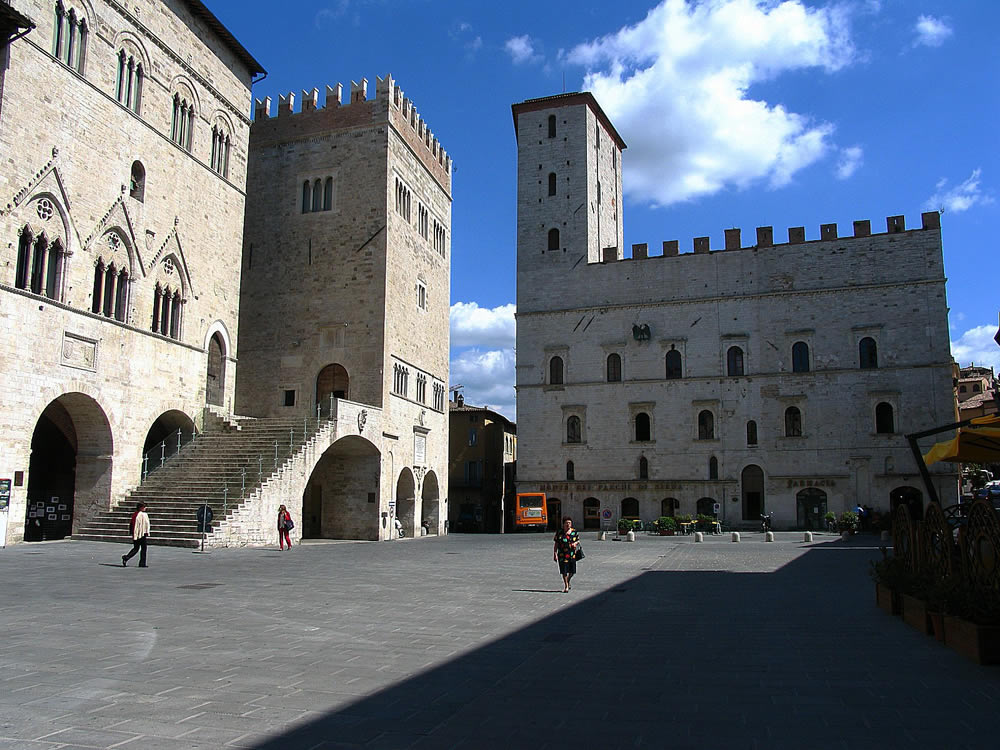 16Km from the estate

The ancient remains of the walls, theatre, temples, 13th century palaces of the Public, the Priors and the Captains, the Gothic cathedral and the church of S. Fortunato, the elegant Renaissance building of S. Maria della Consolazione, outside the walls, probably built according to a drawing by Bramante.

It is the affectionate lure of a town that preserves hidden treasures and which does not appreciate being in the limelight, but from time to time becomes a place of encounter, listening, music, festivity. Todi is this too. But there’s more.

An ideal microclimate, liveable conditions, an exemplary relationship with the rural surroundings. All qualities that have earned Todi the title of “the most liveable city in the world”, as described by eminent researchers from the American University of Kentucky, electing it the model city for a better future.

68Km from the estate

Umbria’s capital, it is a city of high artistic interest (notable, among others, the National Gallery, the Archaeological Museum and the Duomo). Two periods stand out in its history: Etruscan and medieval-primitive Renaissance, up to the 16th century.

From the first there are the surviving remains of walls, arches and the underground. From the second, imposing public and religious buildings (S. Michele, S. Pietro, S. Francesco, the Duomo, the Priori Palace, the Collegio del Cambio, S. Bernardino), and, in several places, the same urban planning texture, with narrow alleys and rough buildings.

A strong and severe city, it is softened by the smile of nature, from the bright visions of the Tiber Valley, the charm of 15th century painters (B. Bonfigli, i Caporali, Fiorenzo di Lorenzo, etc.) among which excel Pinturicchio and Perugino , teacher of the sublime Raphael, who left one of his fresco in the Oratory of the church of S. Severo.

In summer and autumn, the city hosts major theatrical and musical events. 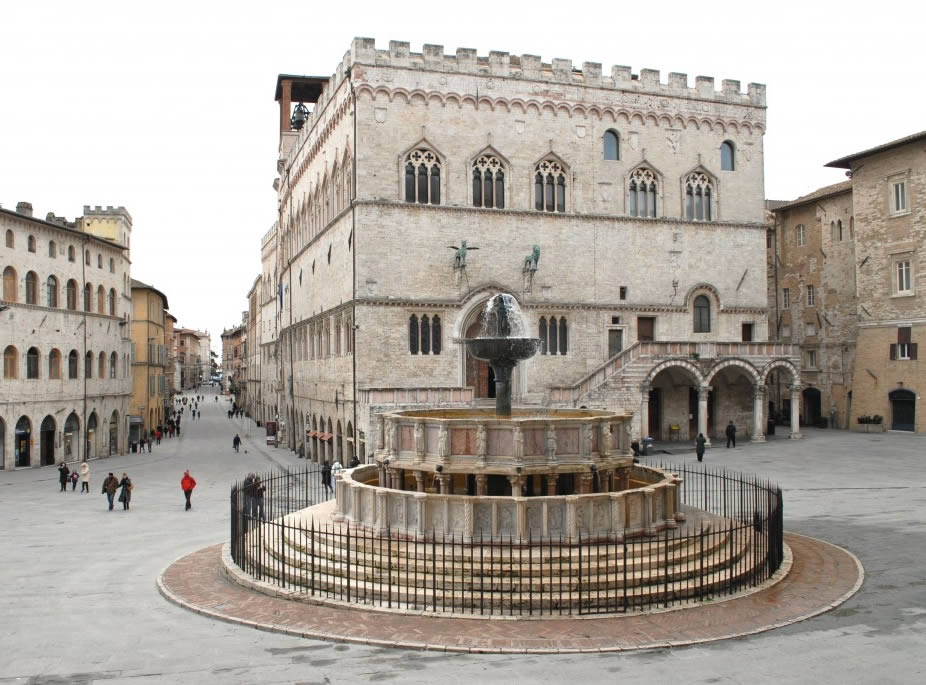 La Tenuta dei Ciclamini
We use cookies to ensure that we give you the best experience on our website. If you continue to use this site we will assume that you are happy with it.Ok